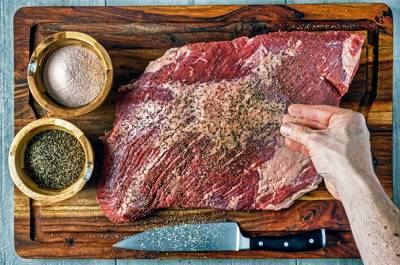 John Majchrowicz, chief sales officer at Chicago’s Meats By Linz and self-described “meat man,” started out in the industry as a meat cutter. He says, after some hard work and good fortune, he is proud to say he’s worked more than 26 years at the company, a fourth-generation, family-owned meat purveyor. One of the largest dry-aged facilities in the country, Linz supplies dry-aged beef to fine dining establishments and discerning customers around the world. Majchrowicz explains the various sections of the cow and the cooking methods that tend to complement each cut.

“Looking at the animal from head to toe, the muscle from the shoulder to the neck such as the chuck, shoulder and brisket, they all have a heavy collagen content and benefit from low and slow cooking with a wet heat technique such as braising,” Majchrowicz says.

Majchrowicz goes on to say, what he calls the “middle meats or steakhouse cuts,” such as the rib, loin and sirloin, are the higher-end, more expensive prime cuts of meat which benefit from quick-searing over direct high heat such as open-flame grilling.

“Thin meats, such as flank, sirloin flap and skirt steaks all do well with a marinade, and cuts from the hip or round such as the round steak, rump roast and eye of round should all be roasted with dry heat in the oven,” Majchrowicz says. “But be sure to cook these roasts just until medium-rare and carve them thinly.”

Here are a few tips to make the most out of the best cuts, including inexpensive value options, straight from the expert.

Marinating adds flavor to the meat and tenderizes at the same time. “I typically love to marinate short ribs, skirt steak, flank steak or thin-cut meats; you don’t have to marinate them for very long for the meat to take on the expected flavor profile,” says Majchrowicz.

Adding acid such as vinegar, citrus juice or yogurt will start tenderizing the meat. Fruits such as pineapple, kiwifruit and papaya also contain acid along with the enzyme papain which breaks down sinew and fiber. Marinate for 30 minutes or up to overnight, but not much longer, as meat can become mushy. For stir-frying, adding cornstarch gives meat a light coating that protects it from intense heat to brown nicely, and helps in preventing overcooking and causing the meat to become tough.

Majchrowicz is a fan of the sirloin flap steak which comes from the hindquarter of the animal, or sirloin. It has a similar dense texture, grain and flavor to a skirt steak so it’s becoming very popular in restaurants, but it can be requested from butcher shops and grocery stores. “It does well with a marinade but can also be directly grilled with a simple rub. It’s great for tacos, fajitas or even a center-of-the plate steak. What’s important is that you cut it against the grain. It’s my go-to steak for a quick meal on the grill.”

Salt should be sprinkled on beef before cooking to draw moisture out, intensifying the flavor of the meat. “I highly recommend salting,” offers Majchrowicz. “I salt and pepper loin and rib cuts a day in advance and leave it uncovered in the fridge overnight. I’ll do heavy steakcentric cuts for this method.”

Pounding with a meat mallet breaks down the tough muscle fibers. Round steak, for instance, can be pounded to about a ¼-inch thickness to make tender cube steak. Majchrowicz warns against pounding so thinly that the meat breaks apart or becomes mushy.

Chuck, brisket and oxtail benefit from slow and low-temperature cooking with techniques such as braising and smoking. When cooked in liquid in a slow cooker, pressure cooker or Dutch oven, the meat’s collagen breaks down, loosening tough muscle fibers. Stew meat can become fork-tender in about 2 hours, while rich oxtail meat starts to fall off the bone after three hours of simmering. Tougher cuts such as brisket can be smoked on the grill or smoker with the fat side down for at least six hours. The final internal temperature should reach 195 degrees F for this method.

Beef can be prepared so many different ways! Master these essential methods with help from a good instant-read thermometer.

Cook to the Right Temperature

Advanced technologies are making it easier for consumers to monitor the doneness of their meats. Precision probe thermometers can stay inside the meat and withstand high temperatures in the oven, grill or smoker. A desired internal temperature can be programmed, and it will alert you when the meat is ready.

Wireless Bluetooth thermometers and apps have become more popular with cooks looking for flexibility and versatility, but highly accurate digital instant-read thermometers remain many chef’s go-to tool. Insert the thermometer through the side of the cut with the tip in the center not touching bone or fat.

“Overcooking beef results in tough and dry meat, while undercooked meats can also be chewy. Just a five-degree variance in temperature can impact the taste and texture of the meat, so it’s important to watch it carefully,” says Majchrowicz. It’s important to remove any meat from its source of heat, regardless of its cooking method, when it reaches five to 10 degrees below the final desired cooking temperature.

Majchrowicz says, “The quality of the meat will improve over time if it’s allowed to rest.” Allow meat to sit five to 10 minutes for thin cuts up to an inch in thickness, or rest 10 minutes per pound for roasts. Resting enables the juices to settle and redistribute into the meat. Slicing into the meat too soon after cooking spills out the internal juices and will contribute to a tough steak or roast.

Cut Across the Grain

Cutting meat across the grain means cutting crosswise across the long muscle fibers. This results in many tiny fibers rather than one long one which makes for easier chewing.

Head west to where some of the world’s best beef originates. Learn about meat label meanings, beef cooking techniques and more.

Cracking the code of food labels and meat scores

It's what's for dinner: 3 beef recipes

Two Montana chefs make the most of its world-class beef with recipes for Korean beef, smash burgers and flank steak. 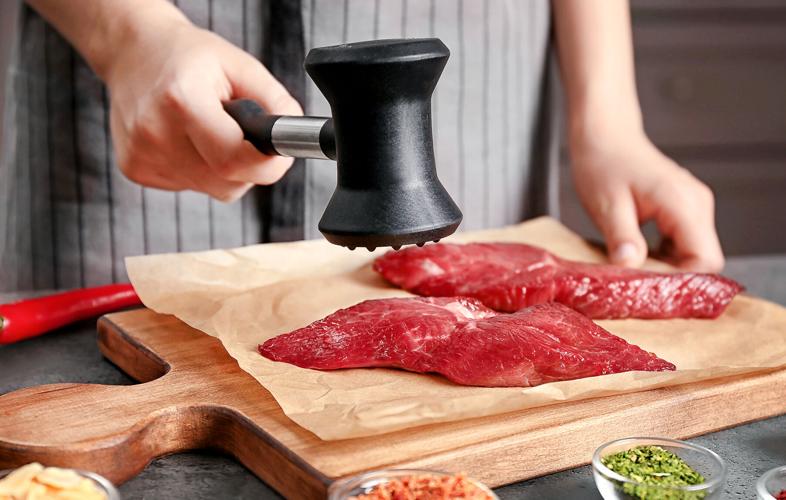 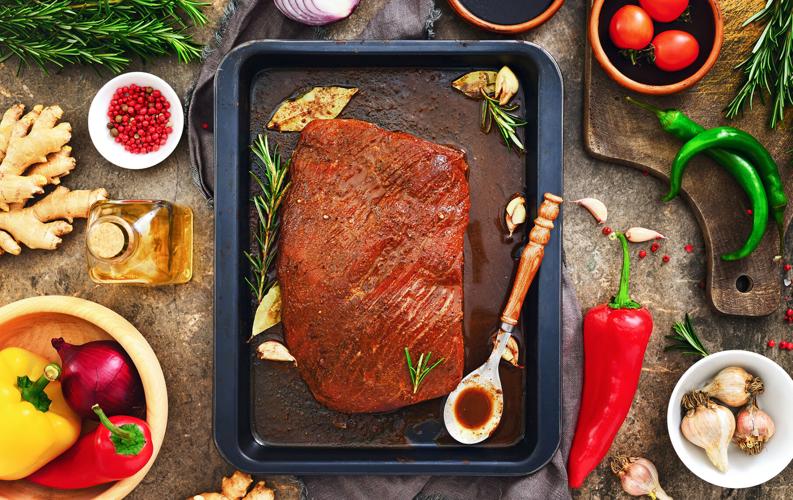 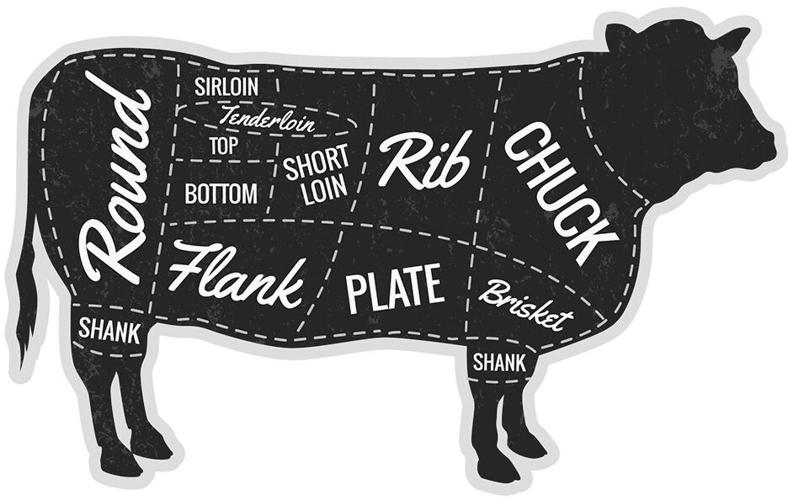 Each cut of beef benefits from various cooking methods. Click to view this interactive map provided by Meats By Linz. 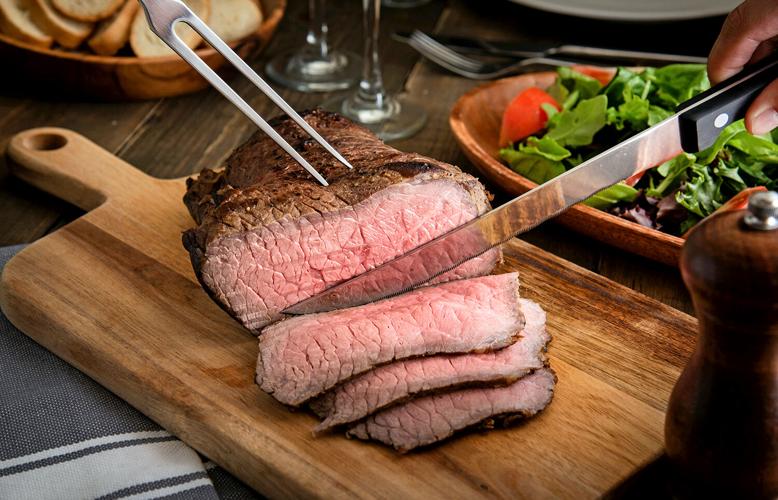