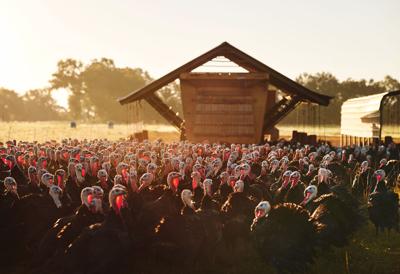 Chances are you’re either serving or consuming turkey this Thanksgiving, just like 88% percent of Americans. And, if you’re like us, you probably want to make sure the turkey you’re eating was treated with compassion during its short life. If so, a pasture-raised turkey from a regenerative farm like White Oak Pastures in Bluffton, Georgia, just might be your new holiday go-to. (And there’s another bonus when you buy a White Oak Pastures bird, but we’ll get to that later! Just keep reading…)

Trust us, once you taste a roasted pasture-raised turkey, you'll probably never want to eat a factory-farmed, supermarket bird again. Pasture-raised turkeys are juicier because they take longer to raise and develop more extensive fat deposits. Most supermarket turkeys, on the other hand, are Broad Breasted White turkeys bred on factory farms. They are given antibiotics and synthetic vitamins that unnaturally promote faster fat development in order to gain weight quickly and develop shorter, larger breasts. Unfortunately, this makes them flightless, overweight, prone to die from poor health and unable to reproduce without artificial insemination.

A passion for pasture-raised

With any pasture-raised turkey, particularly the ones found at White Oak Pastures, you can expect rich flavors, even nutty ones due to the bird’s consumption of acorns and other foraged nuts. The meat will be darker with a silky texture. Thanks to months roaming freely, the turkey will eat a complex, healthy, natural diet of bugs, grubs, worms and native vegetation.

The perfect roast turkey, plus 3 recipes for your leftovers

At White Oak Pastures, the turkeys’ supplemented grains contain no genetically modified organisms. The results are complex with authentic flavors that taste as turkey should.

So, what else influences how the White Oak Pastures’ birds taste? Their upbringing. It's more than just the genetics of heritage birds. It comes down to the nature versus nurture debate. White Oak Pastures’ turkeys have both of these factors going for them.

Why compassionate farming makes a difference

The Nicholas Blacks are certified non-GMO, certified humane and certified Ecological Outcome Verified via the nonprofit Savory Institute’s scientific protocol. The farm never administers antibiotics, nor are they given added growth hormones and steroids, so the birds gain weight naturally, 14 to 22 pounds over 24 to 26 weeks compared to just 16 to 20 weeks for feedlot birds.

At White Oak Pastures, turkeys are slaughtered and butchered humanely by hand at the abattoir with as little stress to the birds as possible. The concern is for the welfare of the bird, not the speed of the process.

The man who started it all

Standing in a lush field, casting his eyes across an endless horizon of blue sky and grazing cattle, Will Harris III, White Oak Pastures' owner, will tell you he's a cowboy and steward of the land and livestock. Clad in a sweat-rimmed, beat-up old Stetson and faded denim, you'd believe his disarming understatement. It's classic Will Harris.

White Oak Pastures' 3,000 acres are the picture of farming in harmony with nature, and this 150-year-old family farm is Harris' heart and his laboratory. The soil is teeming with life because he has, in just 20 years, successfully reversed decades of environmental damage caused by post-World War II chemical-driven agriculture.

He researched how to save his farm and improve the health of the land and the animals, first, by reaching backward and implementing traditional farming methods used by his family for nearly a century, and then by delving deeper into the science and benefits of regenerative farming.

But don't let this laconic response fool you. Harris studied agriculture at the University of Georgia and has successfully combined his education, passion for the land and hard work to make White Oak Pastures a leader in the regenerative farming movement. White Oak Pastures also boasts a zero-waste production system that utilizes each part of the animals that are pasture-raised and hand-butchered on the farm.

This harmonious blend of old and new farming techniques is at the heart of what Harris calls "radically traditional farming," an approach dedicated to three core values: animal welfare, land regeneration and rural revitalization.

Central to the ethos at the farm is their strict adherence to allow livestock to express their instinctive behaviors with open pasture grazing and foraging. "White Oak Pastures successfully and profitably supports 100,000 beating hearts of healthy, thriving, contented livestock," says Harris with pride in his voice.

Be a part of the revolution

What makes the farm so ground-breaking among other American farms is its off-the-charts carbon sequestration, as revealed in a life cycle study that shows White Oak Pastures sequesters more carbon in its soil than its cattle emit in their lifetime. If implemented across agriculture, Harris' regenerative farming model could single-handedly reinvent farming and livestock management, repair the damage of factory farms and fight climate change.

White Oak Pastures’ core value statement says, "If there was ever a time to know your farmer, it is now. There's never been more focus on the supply chain … ," and this is why what you buy is as important as who sells it. Buying a pasture-raised turkey helps make regenerative farming, which is expensive and labor-intensive, more economically viable, and your purchase supports and amplifies practical solutions to the climate crisis.

Arguably the star of the holiday, Feast and Field explores the Thanksgiving turkey with bird sourcing, prep and planning, and the finishing touches.

Stock from scratch is easier than you think

How do chefs make rich and savory gravy, sauces, stews and soup? It’s all about a rich, savory stock or broth.

Confused about what turkey to buy? We've got you covered

Not sure which bird is best for you? Here are five things to consider.

New to turkey? Here are 10 tips for the best bird

It takes just a touch of planning and some basic know-how to guarantee a delicious, perfectly cooked turkey every time. 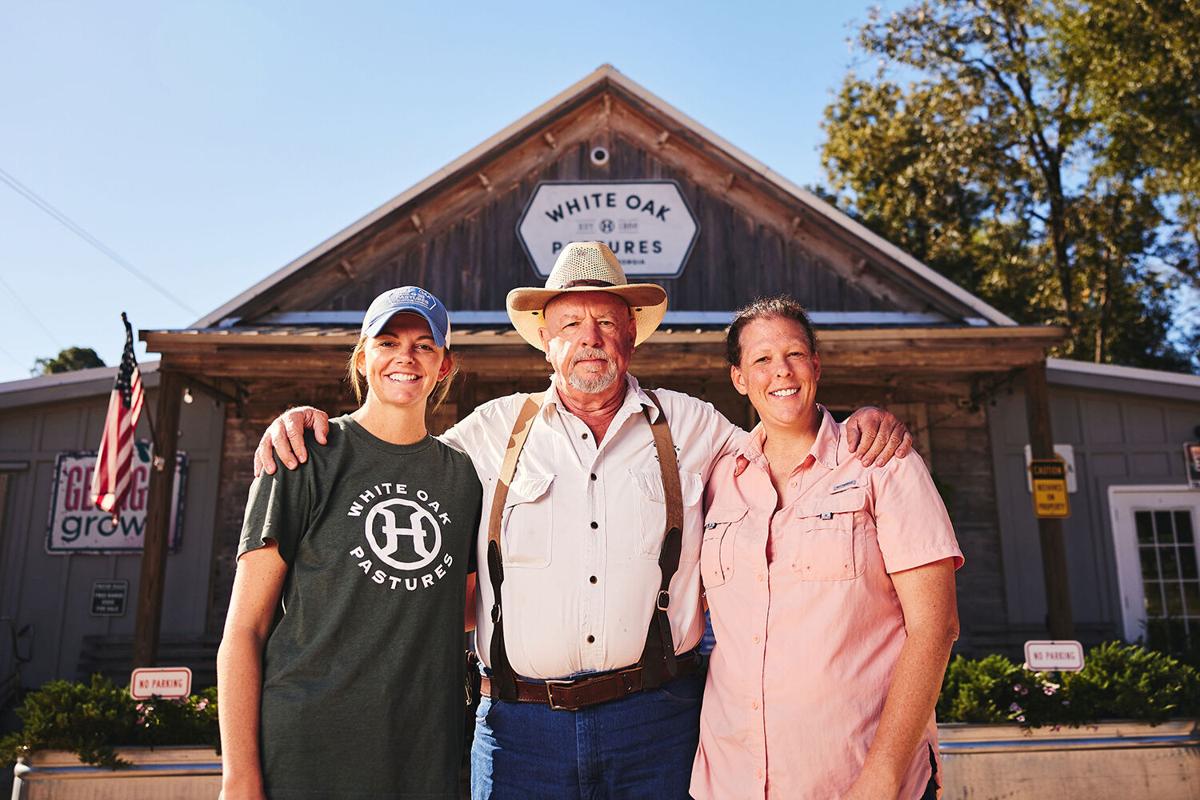 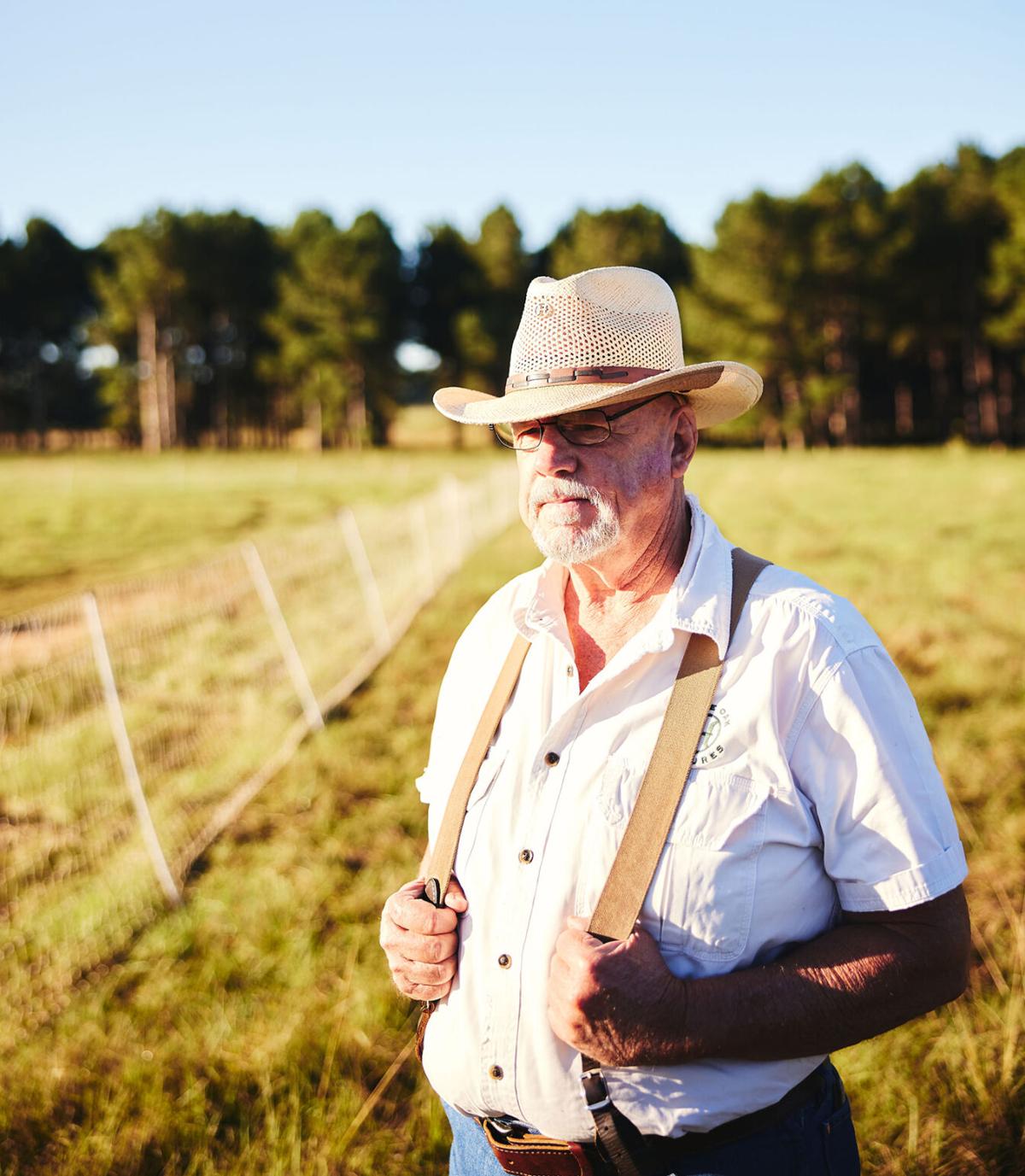 Will Harris, the visionary leader of White Oak Pastures. 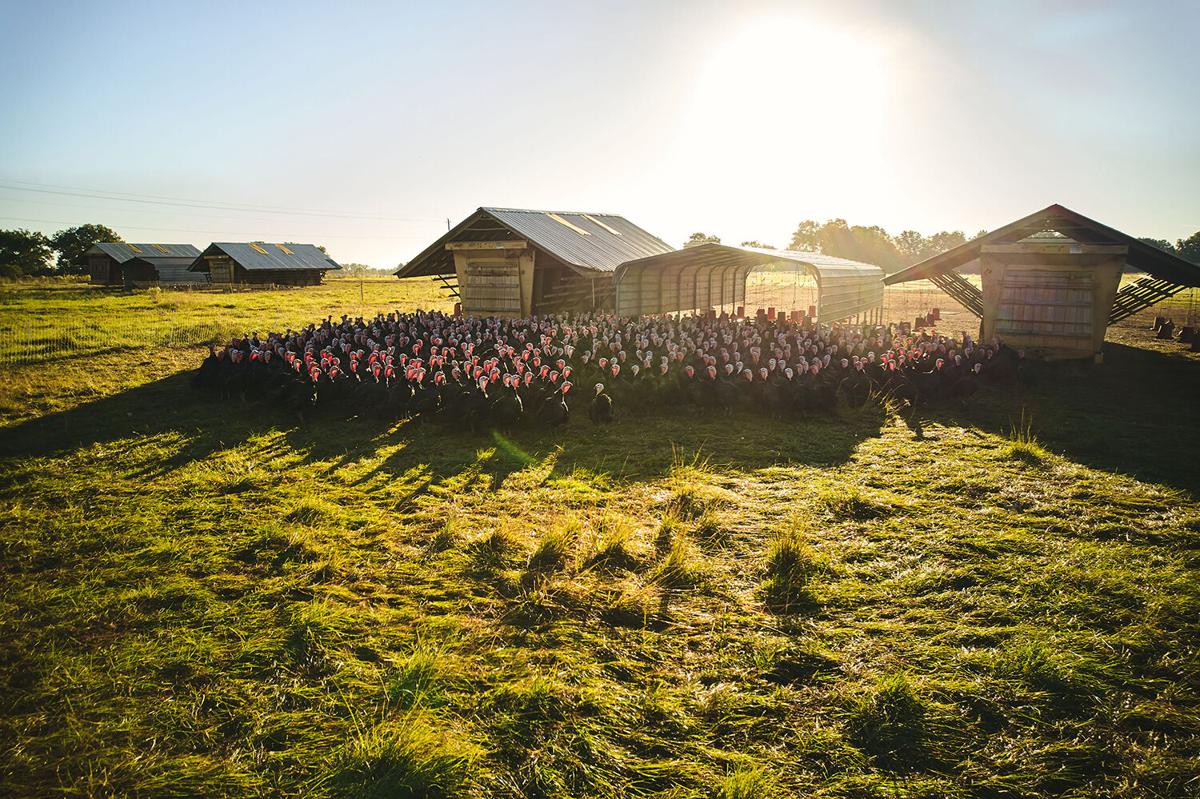 White Oak Pastures’ turkeys spend their lives outside in the fresh air and sunshine, free to roost and roam the fields and forests. 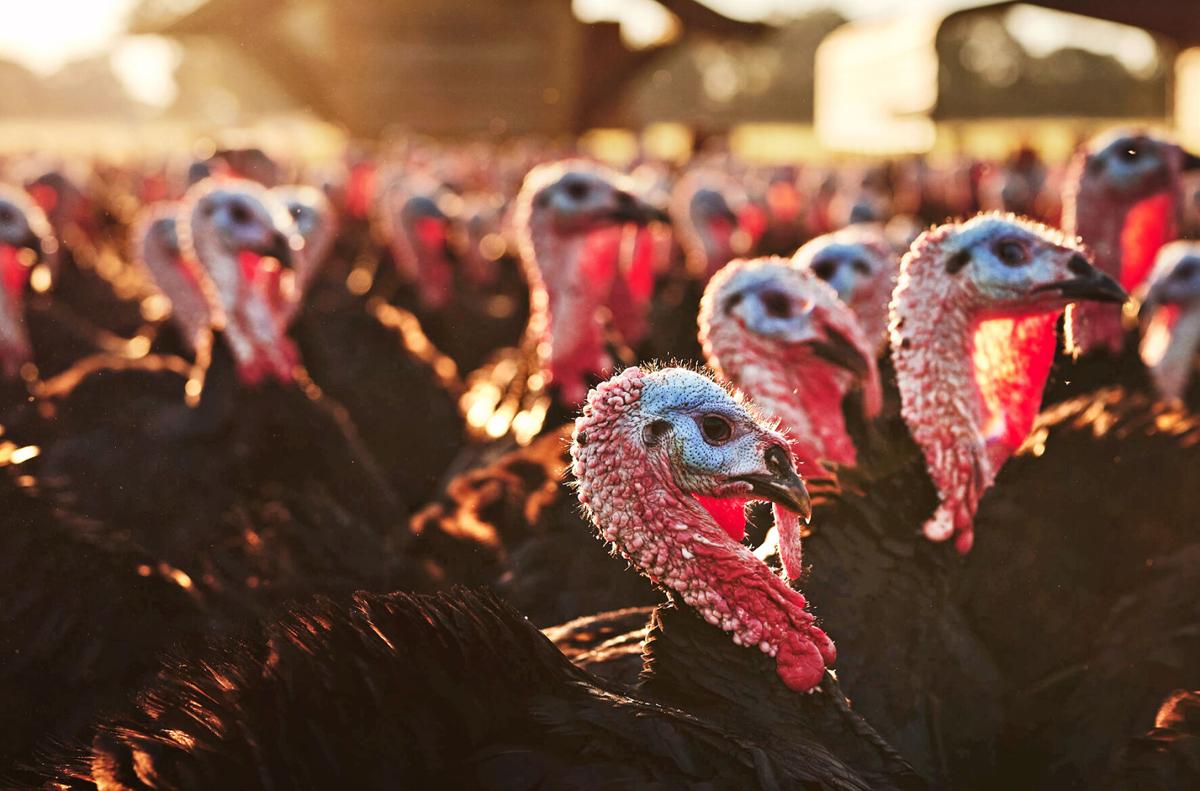 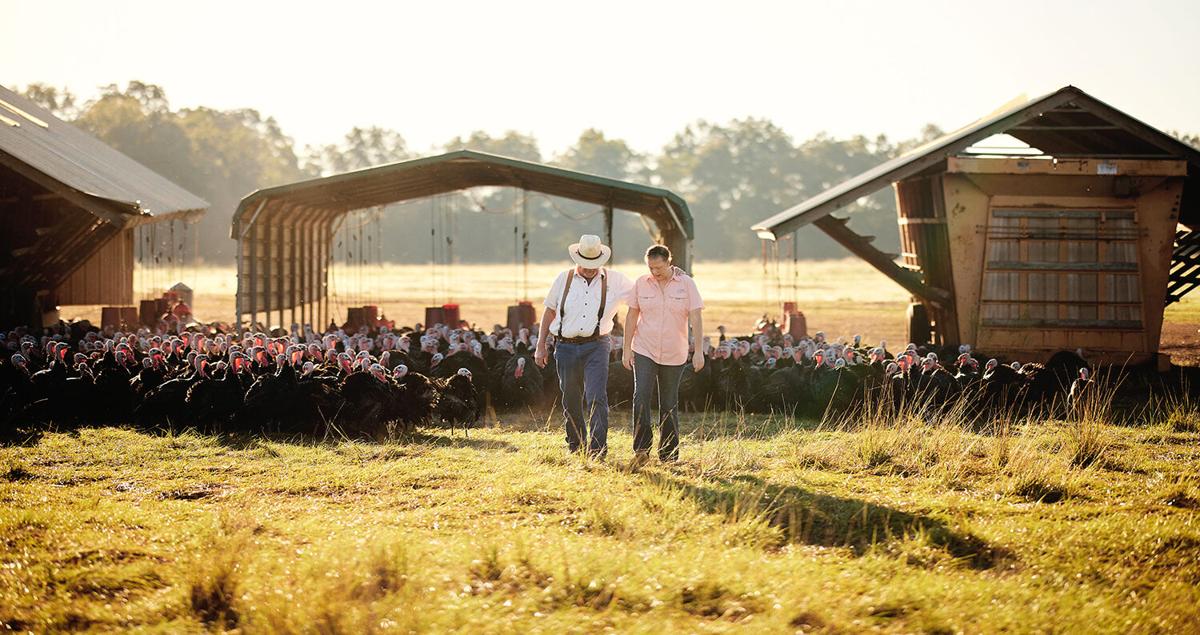 From top, left to right: Will and Jenni Harris; Chicken, cattle and pigs are all raised on the renowned regenerative farm.